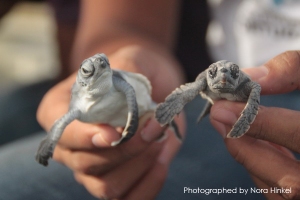 Since 1989, the Sea Turtle Salvation Program officially tries to protect the sea turtles arriving to lay their eggs on the beach in Cozumel, México. Thanks to interested and committed voluntary helpers, the members of the Program take care of the detection of turtle nests, the release and rescue of endangered turtles during their nesting and hatching season. 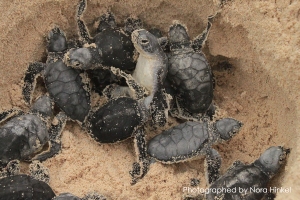 This year, the first turtle nest was detected on 10th April; the nesting season will last until August so that the baby turtles will hatch until September. When the turtles, which are mostly green turtles and loggerheads, arrive on the sandy beach of Cozumel they lay about 100 to 120 eggs each. After 52 to 54 days, the baby turtles hatch with a birth rate of more than 90%. 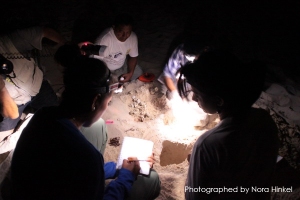 The birth rate has remarkably increased during the last 10 years, not only thanks to the biologist José Martin Coral Perez (48), called Pantera, and his helpers. Each year the volunteers are sent by different brigades such as the Municipal Council, the Marine Park Cozumel, and an group of Cozumelanians called Áak which means “Turtle” in Mayan language. Every night they drive to the eastern shore of the island and detect nests under Pantera’s leadership – he and his nephew Edgar Sosa Coral (17) belong to the very few who are actually able to find the nests in the sand and to determine the species of the turtle immediately. 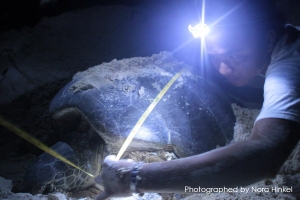 Therefore, Pantera as the “heart of this Program” is working on the beach every night and day during the high season, searching for new nests. Up to 70 new nests are found each night, two days they need to search the 20km long beach – not counting the northern and southern coast because the thick mangrove forest and rough road conditions obstruct the path leading to them. Furthermore, the detection of the nests consumes a lot of time: As soon as a fresh nest is found, they note down among other things the date, time, exact place with help of a GPS, species of sea turtle, and number of nest. In this way, to nest can easily be found when the baby turtles hatch to clean the beach afterwards. 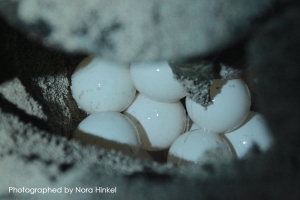 To this day, more than 2300 nests have been registered just on the east beach this year. These are around 2000 nests less than last year because a turtle can lay eggs only every two years; the following year, more than 4000 thousand new turtle nests are expected again. On average, five of a thousand turtles return after 20 years when they are mature themselves.

This low number is due to several reasons: natural predators such as crabs, birds, and fish catch a huge amount of them within the first day. Also pollution impedes the turtle’s way to and from the beach, and dogs and other pets like to dig up the eggs. Some tourists want to see them as well but do not know that moving the egg carelessly hurts and probably kills the embryo because it becomes attached to the eggshell six hours after the egg was laid. 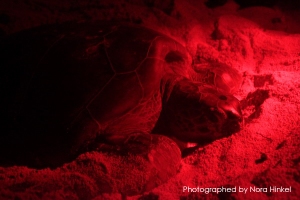 The members of the Salvation Program want to raise public awareness and are eager to organize trips and pass on their knowledge to everybody who is interested in turtles, since many people do not even know that there are turtles nesting in Cozumel. So visitors are always welcome but not at the expense of the turtles. Everyone should be careful not to disturb the turtles while they are laying their eggs and visitors are demanded to keep calm and use infrared instead of white light only. Road and beach are shut for everyone from 6 p.m. until 6 a.m. during the nesting season so that visitors are only allowed in company of one of the official brigades. 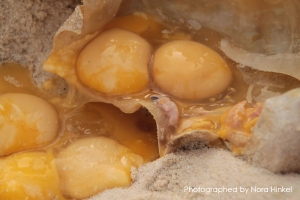 The brigades are making a high effort to keep on protecting the turtles and secure their environment, preventing it from being transformed into another hotel zone. So that the Salvation Program is successful in future, volunteers and especially donations are urgently needed. Donations can be made in form of equipment such as flashlights, batteries, and radio sets as well as in form of money. The money they get they want to invest in a museum and further promote scientific marine research. Just now, Tania Gabriela Chávez Flores (22), postgraduate at the National Autonomous University of Mexico (UNAM), is working on the issue to what extent the climate change influences the development of the Chelonia Mydas, the green turtle, until the stage of a newborn. 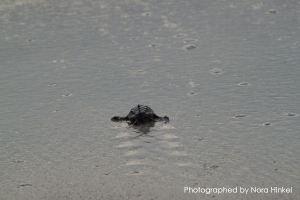